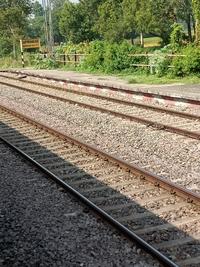 बाराबंकी जिले के जहांगीराबाद थाना क्षेत्र के करड़ गांव में रविवार दोपहर एक मालगाड़ी कपलिंग टूटने से चलते-चलते दो हिस्सों में बंट गई।
मामले की जानकारी पर रेलकर्मी मौके पर...
more...
पहुंचे और कपलिंग जोड़कर रवाना किया। ट्रेनों का आवागमन प्रभावित नहीं हुआ।ट्रेन जहांगीराबाद से गोंडा की तरफ जा रही थी।
Jul 12 2016 (07:55) Citizens demand reopening of Jahajghat Station (www.assamtribune.com)
IR Affairs
NFR/Northeast Frontier
News Entry# 273492      Past Edits
Jul 12 2016 (7:56AM)
Station Tag: Tezpur/TZTB added by SGUJ 🌟 WDG4 🌟 12064~/1329476
Stations:  Tezpur/TZTB   Jahangirabad Raj/JBR
Posted by: Biplob Kagyung~ 498 news posts
TEZPUR, July 11 - The common masses here have demanded that the Government and the Railways restore the historic Tezpur Jahajghat railway station.
Expecting a positive initiative towards this long-pending issue from the new BJP Governments at the Centre and the State as well as the railway authority for reopening of the oldest railway station, the common people and different social organisations have appealed to the authorities to accord priority to this issue.
It is to be mentioned here that the metre gauge railway station constructed during the British regime had fallen into...
more...
a dilapidated state after the railway service was curtailed. The Jahajghat railway station was constructed in 1895 and had a narrow-gauge railway line constructed by the TBR (Tezpur-Bindukuri-Rangapara) company. With the passage of time, and with surface communication gaining importance (including railways) and with water transport facilities becoming less important following the highly-braided Brahmaputra river becoming shallow due to the devastating earthquake of 1950, the narrow gauge railway line gradually gained priority, providing easy means of transportation to the common people of the northern belt of the State. Tea leaves which were once exported through the waterways turned to this railway line for transporting the same to Kolkata. As a result of this, the narrow-gauge line was converted to a metre-gauge line. Till recently, the metre gauge railway service continued with the running of only two regular passenger trains and 2 to 3 rack goods carrying trains a month.
At this juncture, under the initiative of the then Commissioner of North Assam, an important meeting was held on June 13, 2004 at the DC’s conference hall in the presence of the socially-active people of the town and officials of the departments concerned. Based on resolutions adopted at this meet, a project to widen the stretch of the road from Dekargaon to Tezpur Jahajghat was taken up. In later years, a local body christened the Sonitpur Zila Nagarik Mancha submitted a representation to the then Railway Minister, Mamata Banerjee.
At the same time, a PIL was filed at the Gauhati High Court in reply to which the NFR informed that every measure to remove the railway line in the interest of widening of the road and close the station at Dekargaon will be taken. Interestingly, another PIL was filed on October 4, 2013, at the Gauhati High Court regarding the re-opening of the Tezpur Railway Station, which has remained defunct. The railway station was shifted to Dekargaon but the majority of the public of Tezpur are unfamiliar with the place. In order to reinstate the station to its original place, a number of demands have been placed and negotiations held.
Recently a delegation of the Public Interest Protection Committee, Tezpur met the General Manager, Tezpur Jahajghat Railway station, HK Jagi, and submitted a memorandum demanding the opening of a guest house at Tezpur Railway Station and taking necessary measures for the reopening of the Jahajghat Railway station and resumption of train services without any delay. Pulin Bhattacharya, chairman of the People’s Democratic Right, Tezpur said that station is considered significant because of its connection with the industrial growth, business, culture, sports and particularly the tourism sector. “In order to boost business growth, it is necessary to resume railway service till Jahajghat point. Our opinion is that the shifting of the railway station is nothing but an outcome of the vested interests of some people, who have been trying to grab railway land, hurting the interests of the common masses,” he alleged and revealed that once this historic station was visited by great men like Mahatma Gandhi in 1921 the Dalai Lama in 1956 Acharya Vinoba Bhave in 1965. “This station had a great contribution during the Chinese aggression also. So we urge the authorities concerned to have a rethink about the reopening of the historic station,” Puli
Apr 10 2016 (15:56) बाराबंकी-गोंडा रेलखंड पर दामोदरपुर के पास की रेलवे क्रॉसिंग पर रोलर खराब, डेढ़ घंटा खड़ी रहीं ट्रेनें (epaper.navbharattimes.com)
Crime/Accidents
NER/North Eastern
News Entry# 264105      Past Edits
Apr 10 2016 (3:56PM)
Station Tag: Jahangirabad Rj/JBR added by ♤☆■02537 GKP●BNZ LHB SPL■ ☆♤*^~/206964