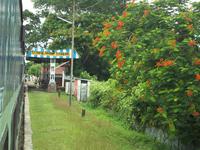 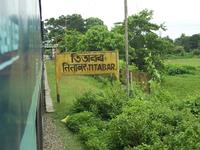 Forest officials were busy monitoring a herd, and did not realise that one male had strayed
A seven-year-old male elephant was mowed down by a passenger train in Titabar in Jorhat district on Wednesday.
The incident took place soon after the animal got separated from its herd and came towards railway track without the knowledge of the field staff, who were busy controlling another larger herd.
The...
more...
front luggage-cum-parcel van of the Guwahati–Ledo Intercity Express derailed after hitting the animal at a spot between Titabar and Mariani stations under Tinsukia division of the Northeast Frontier Railway (NFR). The train was running at 60km per hour when the incident took place.
“The herd, from which the elephant got separated, was taking shelter in Bokaholla tea estate. The herd then split into smaller groups. Our team
was trying to control another herd when the incident took place,” divisional forest officer of Jorhat Davinder Suman said.
“Officials of the NFR and the forest department communicate regularly through a WhatsApp group. But the field staff didn’t realise when this lone elephant got separated from its herd and climbed onto the track,” she added.
This is the second incident of an elephant being killed by a train in this area this year. The first incident took place in February.
The NFR authorities said all passengers got off the train soon after the incident. Senior officials of the Tinsukia division reached the site immediately with a relief train. The stretch was restored at 7.45am. The stranded train left the site around 8.06am.
“While prima facie investigation suggests that the train was within its stipulated speed, a departmental inquiry has been ordered,” an NFR statement said.
Movement of elephants has increased manifold in the area in the recent past. Trains are constantly asked to slow down whenever any information of herd movement is shared with the railway by the forest department. This is a notified elephant corridor for the forest department but not for the railways.
“As many as 200 such incidents have been prevented this year alone owing to a close coordination between the field staff of both the forest department and the NFR,” the statement added.
51215 views
Thanks: 1
Useful: 1
Nov 22 2018 (14:46)Yash M~   56837 blog posts
Re# 4031135-1            Tags
No Tags
Past Edits
This feature shows the full history of past edits to this Blog Post.
1 compliments
😥
@4031135-0  @Yash M~

Nov 22 2018 (10:31)
Train Tag: Ledo - Guwahati Intercity Express/15604 added by 20503 डिब्रुगढ़ राजधानी एक्सप्रेस 20504~/1329476
Trains:  Guwahati - Ledo Intercity Express/15603   Ledo - Guwahati Intercity Express/15604
Stations:  Mariani Junction/MXN   Titabar/TTB
Posted by: Biplob Kagyung~ 568 news posts
JORHAT, Nov 21 - An elephant was mowed down by the Guwahati-Ledo Intercity Express train off Titabar town in Jorhat district in the wee hours today with one bogie of the train getting derailed following the incident. The carcass of the animal was severely mutilated in the incident.
A Titabar subdivisional administration source said that no one was injured in the incident and the bogie was restored by NF Railway staff and after a few hours the train resumed its journey.
Divisional Forest Officer (Jorhat) Davinder Suman told The Assam Tribune that the...
more...
elephant that was killed was a sub-adult member of one of the herds of jumbos that in recent times have been straying out of the Hollongapar Gibbon Wildlife Sanctuary Sanctuary – under Mariani range of the Forest department – and creating havoc in villages, tea estates in the periphery areas of the sanctuary in Mariani.
The DFO said last night the anti-depredation squad of the department along with the assistance of several group of villagers were chasing elephants away from paddy fields at several locations. One group of the jumbos was crossing the railway tracks when the train came and one animal failed to cross over and was run over by the train and killed. She said that the site of the incident was not under the notified train speed reduction zone that is declared by the government in elephant corridors areas to ensure smooth movement of the elephants.
Nov 22 2018 (02:05) Train Derails After It Hits Elephant In Assam (www.ndtv.com)
0 Followers
32941 views
News Entry# 369405  Blog Entry# 4029601      Past Edits
Nov 22 2018 (14:22)
Station Tag: Mariani Junction/MXN added by 12649⭐️ KSK ⭐️12650^~/1203948

Guwahati: An elephant died between Titabar and Mariani stations today after being hit by an express train, which derailed after the incident, a Railways official said.There were no casualties among the passengers and senior officials of the Tinsukia division of Northeast Frontier Railways rushed to spot with a relief train, Railway officer Pranav Jyoti Sharma said.The incident took place at 4.50 am between Titabar and Mariani stations and the front luggage-cum-parcel van of the 15603 Guwahati-Ledo Intercity Express got derailed.Traffic on the section was ultimately restored at 7.45 am and the stranded train left the site at 8.06 am after the coach was re-railed, he added."While prima facie inquiry has found that the train was within its stipulated speed, a departmental inquiry has been ordered to find out details about adherence to protocols," Mr Sharma said.He said that there has been a manifold increase in elephant crossings in the recent past and trains...
more...
are slowed down whenever any information of herd movement is shared with the railways by the forest department in the state."It is only because of the close co-ordination between field level officials of both the forest and railway departments that as many as 200 imminent dashings have been prevented this year alone."The incidents have, however, to be seen in the light of recent spurt of man-animal conflicts," he said.
Nov 21 2018 (17:08) Elephant killed by train in Assam; passengers safe (www.hindustantimes.com)
Other News
NFR/Northeast Frontier
0 Followers
13472 views
News Entry# 369376  Blog Entry# 4028312      Past Edits
Nov 21 2018 (17:12)
Station Tag: Titabar/TTB added by Anupam Enosh Sarkar*^~/401739
Stations:  Titabar/TTB
Posted by: Anupam Enosh Sarkar^~ 27775 news posts