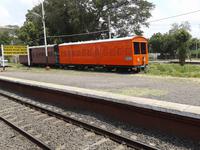 India is set to lose Asia’s first narrow-gauge railway line between Dhaboi and Miyagam in Gujarat, operational since the 19th Century. Considering its heritage value, and the fact that it does not add to present railway requirements in any significant way, the Railway Board in June had marked this line for preservation as an invaluable piece of industrial heritage.
But Western Railway, which has jurisdiction over this line, has refused to preserve it as heritage. It wrote to Railway Board this week, contending that the work of converting this line into broad gauge and linking it to the main line was sanctioned in 2011-12, and that portions of that work has already started.
Arguing...
more...
in favour of gauge conversion, the zone has said that once converted, this 33-km section will reduce congestion in Vadodara. A total 13 tenders for this work has been awarded, amounting to Rs 110 crore, the Western Railway stated. “After the completion of gauge conversion… it will permanently remove the bottleneck in Vadodara and will bring operational flexibility and punctuality,” the note to the ministry said.
The Railway Board, including Member (Engineering), Financial Commissioner, and Railway Board chairman Ashwani Lohani had identified this, as well as four other lines connecting it, for preservation since they handle negligible traffic.
Commercially working narrow-gauge lines are pretty much nonexistent in the world, other than some hill railways in India, and this is an effort by the Railways to save them from extinction. All the lines are in Gujarat, totalling 204 km, and were originally owned by the princely state’s Gaekwad Baroda State Railway.
The zonal railway had been asked for comments on feasibility of the proposed move. The 33-km Dhaboi-Miyagam line, for instance, has only two trains running every day. “Hence it is advised that this section should not be preserved as heritage line,” it has written.
Similarly, of the five lines identified for preservation, the Western Railway has objected to preserving the 51-km Pratapnagar-Jambusar section, arguing that this has been sanctioned for gauge conversion and if this line remains a narrow gauge, continuity of broad-gauge line from Bharuch/Dahesh to Chhota Udepur will be broken.
It has, however, agreed to preserving three smaller branch lines: 38-km Miyagam-Choranda-Malsar section; 19-km Choranda-Moti Koral; and 63-km Bilimora-Waghai section.
Western Railway has proposed that a 9.5-km section between Patalpani and Kalakund may be taken up for preservation as a narrow gauge line.
Sep 12 2018 (23:27) Gujarat: Asia’s First Narrow-Gauge Railway Line Which Opened In 1862 To Soon Become Broad-Gauge  About Swarajya Useful Links Participate Stay Connected (swarajyamag.com)
New Facilities/Technology
WR/Western
0 Followers
23377 views
News Entry# 357328  Blog Entry# 3801698      Past Edits
Sep 12 2018 (23:27)
Station Tag: Miyagam Karjan Junction/MYG added by a2z~/1674352

The 33-km Dabhoi-Miyagam line, India’s first narrow gauge railway stretch which started operations in 1862, is set to be broadened. The decision to broaden it was first announced just weeks after the Railways identified it as one of the five narrow gauge lines that can be preserved to promote heritage tourism.
This week, the Western Railways has written to the Railways Board highlighting that the work of converting this line into broad gauge and linking it to the main line was sanctioned in 2011-12, and that portions of the work have already started.
The...
more...
line, which was closed on 15 July this year, was designed by a British engineer named A W Ford. When it started operation, coaches were pulled by oxen. However, steam engines were deployed in the year 1863, when Maharaja Khanderao of Baroda State purchased three steam locomotives built by Glasgow-based Neilson and Company.
Apart from this, the other lines which were identified for preservation are the Miyagam-Malsar line, the Charonda-Moti Karal line, the Pratap Nagar-Jambusar line and the Bilmora-Waghi line.
Now a days commercial narrow gauge lines are virtually non-existent, with the their usage being mainly restricted to tourist trails.
Page#    Showing 1 to 8 of 8 News Items
Scroll to Top
Scroll to Bottom
Go to Mobile site
Important Note: This website NEVER solicits for Money or Donations. Please beware of anyone requesting/demanding money on behalf of IRI. Thanks.
Disclaimer: This website has NO affiliation with the Government-run site of Indian Railways. This site does NOT claim 100% accuracy of fast-changing Rail Information. YOU are responsible for independently confirming the validity of information through other sources.
India Rail Info Privacy Policy