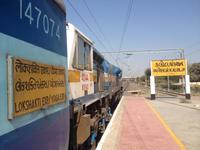 AHMEDABAD: A team of Government Railway Police (GRP) investigating the theft of Rs 20 lakh meant for an ATM at Kalol railway station reconstructed the crime in presence of senior police officials to ascertain the possibility of insider involvement and how the crime took place.
On Thursday evening, two bikers snatched a bag containing Rs 20 lakh from Kalol railway station when two employees of Dena Bank approached the ATM for deposit along with a security guard. As per the complaint, the bag containing cash was momentarily placed on a tin shade when it was lifted by two youths who had come on a bike
According...
more...
to Kalol railway police, the incident took place at 6 pm when Tushar, a probationary officer with Dena Bank, came with a peon Dinesh and a security guard Lakshmiram in an auto at the bank's ATM. The ATM was located adjoining to Railway Employees' Union on the station premises.
"According to Tushar, they had got the money to deposit in ATM and were in process of transferring it. The bag containing cash was kept on a tin shade when two youths came near the auto on a black high-powered bike and the pillion rider snatched it in a matter of seconds. The bank officials tried to nab the duo but in vain," said a Kalol police official.
HR Muliyana, superintendent of police (railways), told TOI that they wanted to ascertain the roles the bank employees played and in which direction the thieves fled. "We believe that it is an insider job as the bikers knew what to expect and thus they were so precise. The investigation is on and we are hopeful of solving it soon," he said.
Kalol police staff supporting in the probe including KS Savani, SDPO, Kalol, were also present at the reconstruction, said railway police officials.
Page#    Showing 1 to 3 of 3 News Items
Scroll to Top
Scroll to Bottom
Go to Mobile site
Important Note: This website NEVER solicits for Money or Donations. Please beware of anyone requesting/demanding money on behalf of IRI. Thanks.
Disclaimer: This website has NO affiliation with the Government-run site of Indian Railways. This site does NOT claim 100% accuracy of fast-changing Rail Information. YOU are responsible for independently confirming the validity of information through other sources.
India Rail Info Privacy Policy