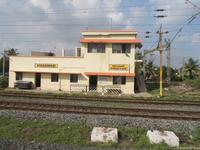 Jul 17 2018 (14:14)
Station Tag: Vyasarpadi/VPY added by a2z~/1674352
Stations:  Basin Bridge Junction/BBQ   Vyasarpadi/VPY
Posted by: A2Z~ 12818 news posts
CHENNAI: Thousands of passengers were stranded between Vyasarpadi and Basin Bridge for 45 minutes after five Express trains were detained. The incident occurred at 2.35 pm when an Express train shunted into Chennai Central station, and the overhead line on the track between Basin Bridge and Chennai Central was disconnected.
Sources say the overhead line was entangled with the pantograph (a device mounted on the roof of a train to receive power from the overhead line) of a loco, leading to the disconnection. An operational staff who spotted the incident alerted the railway officials. Passengers travelling by the Mangaluru-Chennai West Coast Express,  Thiruvananthapuram Central-Chennai Central AC Express, Puri Chennai Central Weekly SF Express,  Bengaluru-Chennai Lalbagh Express and Sulupetta Chennai Moore Market Complex MEMU had...
more...
to bear the brunt of the delay.
The trains were stopped one after another from Basin Bridge to Vysarapadi railway stations. Many passengers could not use the toilets because the trains water tanks went empty, and many suffered without food. Chennai division railway officials carried out the repair works and restored the line by 3.30 pm. Railway officials claimed that there was no delay in departure of EMU and Express trains from Chennai.
Jun 03 2016 (10:11) Railway eviction drive fails as cops play truant (timesofindia.indiatimes.com)
Crime/Accidents
SR/Southern
News Entry# 269907      Past Edits
Jun 03 2016 (10:12AM)
Station Tag: Washermanpet/WST added by Adityawap7~/1136519

Jun 03 2016 (10:12AM)
Station Tag: Vyasarpadi/VPY added by Adityawap7~/1136519
Stations:  Washermanpet/WST   Vyasarpadi/VPY
Posted by: BangaloreMail^~ 87 news posts
Chennai: Southern Railway on Thursday was unable to evict around 300 hutments that have encroached upon railway land, due to lack of support from the city police and Government Railway Police (GRP). The slum had spread over 30 years by the tracks between Vyasarpadi and Washermenpet.
Around 120 Railway Protection Force (RPF) assembled in the area at 9:30am to evict the slum dwellers and demolish the hutments. As is the case with such drives, there was tension and opposition from the residents. Since RPF doesn't have jurisdiction over law and order, they needed the support of local police.
But...
more...
railway sources said that local police did not come to the spot owing to the sensitive nature of the eviction. Because of this, the drive had to be abandoned. The area falls under the Royapuram constituency, represented by D Jayakumar of the AIADMK.Illegal human settlements near railway tracks are a prime concern for railways as it is a safety and environmental issue.
Since these impoverished settlements don't have toilets, they defecate in the open, mostly on the tracks, adding to corrosion. Constant movement on the tracks also displaces ballasts which support the tracks, posing a risk to trains.
The railways is also bothered about runover deaths and chain/ mobile snatching which are high in this locality. Southern Railway is in a quandary as the southern bench of the National Green Tribunal has asked the zone to prevent the practice. But the city police have been playing truant whenever the railways planned a drive.
On Thursday evening, RPF officials held a meeting with city police commissioner T K Rajendran to raise the issue. "The police will assist the railways in evicting the squatters in a phased manner," a senior police officer told TOI.
Mar 05 2016 (19:46) Modernisation of an old railway station under way (www.thehindu.com)
New Facilities/Technology
SR/Southern
News Entry# 260292      Past Edits
Mar 05 2016 (7:46PM)
Station Tag: Vyasarpadi Jeeva/VJM added by KM 51602/248735

Mar 05 2016 (7:46PM)
Station Tag: Vyasarpadi/VPY added by KM 51602/248735
Stations:  Vyasarpadi Jeeva/VJM   Vyasarpadi/VPY
Posted by: Karthik.iyer27^~ 2783 news posts
Vysarpadi Jeeva will receive a raft of facilities, including better illumination, a factor that may help check petty thefts at the facility
One of the oldest railway stations in the city – Vysarpadi Jeeva – will be receive a facelift soon. Work on developing modern facilities, including tiled pathways on platforms to make it easier for commuters to detrain, and computerised reservation counters has already begun. The project is being taken up as part of Southern Railway’s Improvement of Passengers Amenities Scheme for 2014-2015.
The total cost of the project is estimated at...
more...
around Rs. 90 lakh and the work is expected to be completed in a few months.
“Unlike other railway stations, including Perambur and Basin Bridge, which are key stations where long distance trains halt, Vysarpadi railway station caters to local commuters,” said a railway official.
After Royapuram, Vysarpadi is the oldest and one of the busiest stations in the western parts of the city. It connects Chennai Central with Arakkonam, Tiruvallur and Tiruttani. More importantly, the Vysarpadi railway station is located at the centre of four rail routes for long distance trains that head to the north (Gummudipoondi), west (Jolarpet via Arakkonam), south (Egmore) and east (Chennai Central).
Work on replacing the damaged concrete floor of the platform with tiles is currently being undertaken. The rest of the platform will be concrete floor.
New seating arrangements, electronic boards displaying train timings, better illumination, water cooler and food stalls are others amenities that will come up at the station.
“Policemen patrol the station, especially during the evening hours, to prevent anti-socials from roaming near the facility,” said S. Lakshmi, a commuter from Vysar Nagar.
For many years, chain snatching, luggage and cell phone thefts have been reported from the station. It’s proximity to crime-prone areas, poor illumination at the railway station and also on the stretches connecting the station, the railway station at Vysarpadi has been a den for anti-socials for years.
Page#    Showing 1 to 3 of 3 News Items
Scroll to Top
Scroll to Bottom
Go to Mobile site
Important Note: This website NEVER solicits for Money or Donations. Please beware of anyone requesting/demanding money on behalf of IRI. Thanks.
Disclaimer: This website has NO affiliation with the Government-run site of Indian Railways. This site does NOT claim 100% accuracy of fast-changing Rail Information. YOU are responsible for independently confirming the validity of information through other sources.
India Rail Info Privacy Policy