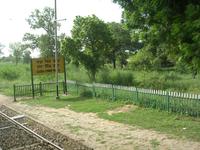 Apr 17 2016 (7:31AM)
Station Tag: Sadda Singhwala/SSZ added by Saurabh~/865325
Stations:  Bathinda Junction/BTI   Sadda Singhwala/SSZ
Posted by: Saurabh~ 1 news posts
When rural railway stations in the state are struggling for basic amenities, the small Sadda Singh Wala railway station is poised to become a model railway station. The railway station, about 12 km from Mansa, is being developed as one of the best railway stations in rural Punjab.
Being located between Mansa and Bathinda railway line belonging to the Northern Railway, the station was earlier having a single line which is now converted to a seven-line station. The signalling system used here was the solid state interlocking which is the world’s latest technology and major stations like Bathinda and Mansa railway stations still do not have such advanced system of operation. With a DG set and solar panel installed at the station,...
more...
there has been an uninterrupted power supply.
“With extra parking facility, the station can be developed as a loading station for food grains and unloading station for fertilisers. This would prove a relief to farmers as this will save time and cost of transportation. With such development, the commercial value of the surrounding area was bound to increase significantly and it will further help in the overall development,” said Gurpyar Singh, a resident of Sadda Singh Wala village.
Besides, basic amenities such as drinking water, access road, benches and lavatories, foot overbridge to cross the lines and dedicated passenger waiting hall are adding value to the station. Tree plantation is also done to make the environment better. It is being developed by Talwandi Sabo Power Limited which along with the Northern Railway has taken a number of initiatives to build the station as one of the model rural railway stations and is using the track for movement of goods trains for carrying coal.
“Earlier, passengers were struggling for basic facilities at the station, said Anand Gupta, AVP, Projects TSPL.
“Sadda Singh Wala station is one of the best rural railway stations of Punjab. Besides technical upgrade, our focus is on creating basic amenities for travellers. Our aim was to link our business with the development of society to create a long-term sustainable impact,” he said.
9452 views
Apr 17 2016 (12:48)suksham mittal~   442 blog posts
Re# 1807040-1            Tags
No Tags
Past Edits
This feature shows the full history of past edits to this Blog Post.
@1807040-0  @Saurabh~
What is solid state interlocking?
9325 views
Apr 17 2016 (13:31)Saurabh~   247 blog posts
Re# 1807040-2            Tags
No Tags
Past Edits
This feature shows the full history of past edits to this Blog Post.
@1807040-1  @suksham mittal~
Train passes through station At MPS..Double Line Station has SSI3 INterlocking..
8910 views
Thanks: 1
Apr 17 2016 (13:44)Abdulwaheed Sayed~   3887 blog posts
Re# 1807040-3            Tags
No Tags
Past Edits
This feature shows the full history of past edits to this Blog Post.
@1807040-1  @suksham mittal~
interlocking using Solid State devices.
Interlocking ensures that there is no conflicting movement of trains on tracks. For instance, if there is a train on certain section of track, it is imperative that the signal at the beginning of the section is red (or At danger, as it is called in Railways) to ensure that any other train doesn't enter in that section. this is done in many places manually using levers, but that is an old, antiquated technology and puts limitations on how many trains that area can operate. hence IR is modernizing its n/w by replacing those levers with Relays.
however,...
more...
even relays have their own issues, as its an electromechanical device and despite it being faster, it still takes decent fraction of a second to act+has lower reliability owing to moving parts. hence the next step is to replace those relays with microprocessors, which can take action in microseconds and have no moving parts. since microprocessors (or electronic devices in general) are called solid state devices, the interlocking system utilizing them is called Solid State Interlocking.
Page#    Showing 1 to 1 of 1 News Items
Scroll to Top
Scroll to Bottom
Go to Mobile site
Important Note: This website NEVER solicits for Money or Donations. Please beware of anyone requesting/demanding money on behalf of IRI. Thanks.
Disclaimer: This website has NO affiliation with the Government-run site of Indian Railways. This site does NOT claim 100% accuracy of fast-changing Rail Information. YOU are responsible for independently confirming the validity of information through other sources.
India Rail Info Privacy Policy