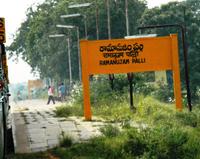 Dec 24 2013 (1:09AM)
Train Tag: Guntakal - Tirupati (Day) Passenger/57476 added by Sudarshan**/624989
Trains:  Guntakal - Tirupati Passenger/57476   Tirupati - Amravati SF Express/12765
Stations:  Dharmavaram Junction/DMM   Chinnekunta Palli/CCI   Ramanujam Palli/RLX
Posted by: Sudarshan~ 390 news posts
The Guntakal - Tirupathi Day passenger was stopped at Dharmavaram for 2.5 hrs, as the staff of Chinnekunta Palli station have informed that the Concrete Sleepers under the track between Chinnekuntapalli & Ramanujam Palli have been damaged.
Some unidentified people have covered the railway tracks with stones. Which lead for the concrete sleepers to get damaged. The officials are suspecting that this was the reason for the Amaravti SF train's Diesel Loco's tank getting punctured last Saturday.
Police have recovered an Iron Sheet & a Belt belonging to a Deisel loco at...
more...
the spot...
The staff has replaced the damaged concrete sleepers with new ones and let the train leave Dharmavaram.
The railway police have registered a case and are in search of the culprits.
Page#    Showing 1 to 1 of 1 News Items
Scroll to Top
Scroll to Bottom
Go to Mobile site
Important Note: This website NEVER solicits for Money or Donations. Please beware of anyone requesting/demanding money on behalf of IRI. Thanks.
Disclaimer: This website has NO affiliation with the Government-run site of Indian Railways. This site does NOT claim 100% accuracy of fast-changing Rail Information. YOU are responsible for independently confirming the validity of information through other sources.
India Rail Info Privacy Policy