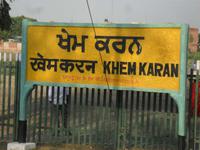 Railfanning in underrated sections of IR.

Before 1947 , there used to be tracks from Khemkaran (Indian Border Village) to Kasur Town (Pakistan Border village). Kindly see the map attached. The Black color arrowed Line from Khemkaran to Ferozpur through Pakistan was the original line Pre-Independence which used to run along the Main road connecting Khemkaran Village with Nearest Towns (Kasur) and further through Husainiwala Border Check post to Ferozpur. But as the Partition line was drawn by Indian Ministers , the people of these border villages have to suffer the most.
One such example is Khemkaran village which is now somehow Cut off from main land. And this was the reason why Pakistani Forces were easily able to Capture this Khemkaran Village during the 1965 war....
more...
Indian Government and the Punjab state Government has not done enough to help or compensate these border area people. Indian railways started Direct Train connectivity from Khemkaran to Amritsar but its a Circular journey for those who wish to go to southwards. Only option left is by road transport which is the life line of these regions.
Its been nearly 50 years that many sections of society, Political groups and social service groups have protested for a proper rail connectivity for Khemkaran village with the Nearest Big Town Ferozpur as a alternative for the past tracks. Even in 2013 Money was sanctioned from Centre but on ground Nothing started.
Kindly have a look at the map.
The Black color arrowed Line is the Earlier tracks in past which are now defunct from Husainiwala (Near Firozpur City station).
And the Red color arrowed Line is the Planned and "to be made" line by Indian railways. Clearly you can see this simple straight line (adding a Rail bridge over Satluj river) can prove a serious boon for these border area people. Also along with this small rail link could reduce nearly 240 km distance between Amritsar and Mumbai , along with can be used as a alternate route for Amritsar to Rajasthan tracks via Haryana (We all saw what Jats did to the whole rail connectivity last March).
PS: Latest guidance taken from /news/post/267970
Rail Fanning
30343 views
Great: 8
★
Aug 29 2013 (19:56)   KEMK/Khem Karan (1 PFs)

More Posts
Page#    Showing 1 to 5 of 6 blog entries  next>>
Scroll to Top
Scroll to Bottom
Go to Mobile site
Important Note: This website NEVER solicits for Money or Donations. Please beware of anyone requesting/demanding money on behalf of IRI. Thanks.
Disclaimer: This website has NO affiliation with the Government-run site of Indian Railways. This site does NOT claim 100% accuracy of fast-changing Rail Information. YOU are responsible for independently confirming the validity of information through other sources.
India Rail Info Privacy Policy