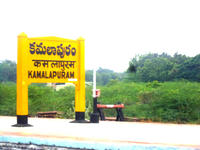 One person was killed on the spot and 16 goats were crushed to death when an express train coming from Madurai ran over them at S. Pudukottai near Kamalapuram on Friday. The deceased was O. Vairavan (60), a shepherd from S. Pudukottai. The police said Vairavan was trying to cross the railway track along with goats without seeing the train when it hit them.
Page#    Showing 1 to 2 of 2 News Items
Scroll to Top
Scroll to Bottom
Go to Mobile site
Important Note: This website NEVER solicits for Money or Donations. Please beware of anyone requesting/demanding money on behalf of IRI. Thanks.
Disclaimer: This website has NO affiliation with the Government-run site of Indian Railways. This site does NOT claim 100% accuracy of fast-changing Rail Information. YOU are responsible for independently confirming the validity of information through other sources.
India Rail Info Privacy Policy