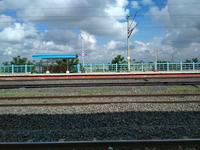 Several express trains suffered detention enroute in the Villupuram-Tiruchi chord line section in the small hours of Tuesday following rail fracture between Thalanallur and Icchangadu.In all, seven trains from and to Chennai were detained at different places with the detention time ranging from 20 minutes to 85 minutes because of the problem that was noticed at around 2.35 a.m.The loco pilot of the Tirunelveli-Chennai special train apparently felt a heavy jerk while passing through that stretch and alerted the station master of Thalanallur, railway sources said.Consequently, the Tirunelveli-Chennai Express, Tuticorin-Chennai Pearl City, Rameswaram-Chennai, Sengottah-Chennai, Chennai-Tiruchi Rockfort and Chennai-Mangalore Express were halted at stations, including Sendhurai, Ottakoil, Vriddhachalam, Thalanallur, and Icchangadu.
Railway officials attended the problem in the early hours and the trains...
more...
were operated at a restricted speed in that particular stretch, the sources added.
Page#    Showing 1 to 1 of 1 News Items
Scroll to Top
Scroll to Bottom
Go to Mobile site
Important Note: This website NEVER solicits for Money or Donations. Please beware of anyone requesting/demanding money on behalf of IRI. Thanks.
Disclaimer: This website has NO affiliation with the Government-run site of Indian Railways. This site does NOT claim 100% accuracy of fast-changing Rail Information. YOU are responsible for independently confirming the validity of information through other sources.
India Rail Info Privacy Policy