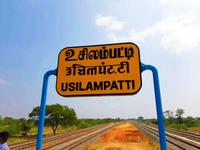 Jan 23 2021 (10:15)
Station Tag: Dindigul Junction/DG added by Anupam Enosh Sarkar/401739
Stations:  Dindigul Junction/DG   Madurai Junction/MDU   Thiruvarur Junction/TVR   Bodinayakkanur/BDNK   Teni/TENI   Andipatti/ADPT   Usilampatti/USLP   Pollachi Junction/POY   Mettur Dam/MTDM   Mecheri Road/MCRD   Ranippettai/RPT   Karaikal/KIK
Posted by: Anupam Enosh Sarkar^~ 27775 news posts
Chennai: Southern Railway may have completed gauge conversion and electrification of some stretches of lines in the state, but few attempts have been made to make the most of these to improve train connectivity. With no trains on at least three lines which are ready and not enough trains on two other lines, passengers want reintroduction of the trains that were running when the lines were metre gauge.
There are no trains on the Chennai-Ranipet stretch, now opened primarily for freight, the Dindigul-Pollachi, Madurai-Bodi and the Thiruvarur-Karaikal lines, while there are only two services along the Sengottai-Kollam stretch.
In...
more...
the coming months more lines are set to be ready after gauge conversion of Usilampatti-Andipatti, Andipatti-Theni and Theni-Bodinayakanur lines and doubling of Macheri Road-Mettur dam and Omalur-Mecheri Road lines are over.
Investments have been made to ready the infrastructure, but railways, fearinbg low patronage, is waiting for all the lines or the full stretch of a line to be completed before running trains.
Most of the scheduled express trains have resumed, connecting towns where there is demand for travel.
Edward Jeni, secretary of Kanyakumari District Railway Users' Association (KDRUA), said railways should run most trains on the lines that are ready after gauge conversion and electrification. “There is scope to run more trains on Sengottai-Kollam stretch and on Thiruvarur-Karaikal and Madurai-Theni stretch which will be ready soon. Railways can push for resuming trains that were running when lines were metre gauge.”
Since the Arakkonam-Salem MEMU was launched, people have been suggesting such services on short routes connecting small towns so that people can be encouraged to switch to trains from expensive buses.
An official said passenger services could not be introduced because of the Covid restrictions.
“There is scope for passenger services on the Chennai-Ranipet and the Tindivanam-Nagari stretch and also on other lines in future.” The idea is to complete ongoing infrastructure upgrade and bring more towns into the rail network so that trains can be introduced when there is a need, he added.
Sources said if private trains connecting traffic-intense towns become a success, railways may improve connections between small towns using train sets that do not need locomotives.
Dec 13 2020 (18:35) CRS to inspect converted BG section between Usilampatti and Andipatti in Madurai Division of SR (www.railpost.in)
Other News
SR/Southern
0 Followers
46757 views
Great: 5
Thanks: 1
Useful: 2
★
News Entry# 428358  Blog Entry# 4811795      Past Edits
Dec 13 2020 (18:35)
Station Tag: Usilampatti/USLP added by अमीष कुमार/1702584