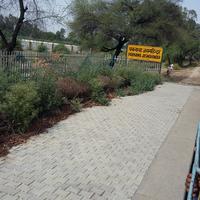 Pabnawa (Kaithal) : Unwilling to take no for an answer from the railway authorities to provide infrastructure for their railway station, 2,500 households of this village have proved that teamwork can bring much needed development. Villagers have renovated the station with Rs10.5 lakh pooled from every family. Six months on and after spending Rs10.5 lacs, 90 per cent of the work is complete. Work on a memorial for a village martyr is underway. The residents have constructed a 750-foot long platform, urinals, installed a water cooler and outer walls with iron grills. The cemented floor at the entry point is under construction. Impressed, the railway authorities have also started constructing two sheds at the station besides providing interlock tiles for the platform. “Residents have contributed Rs500 to Rs11,000 as per their paying capacity. Till date we have spent Rs10.5 lakh,” said Subedar Fateh Singh (retd), cashier of the Pabnawa Gram Jan...
more...
Vikas samiti. On September 2, 1965, Captain Jasmohinder Singh from village had attained martyrdom during Indo-Pak war and the government had announced a railway halt which was later upgraded to a C grade railway station. For the past many years, residents had been demanding better facilities at the station. “In November, railway officials had during an inspection expressed their inability in providing the required facilities. But they asked us that if we could spend money on our own, then they could give permission for the renovation,” said Husan Singh, village sarpanch. “We have decided to honour the panchayat and samiti members to motivate other panchayats of the district,” said KM Pandurang, DC.
9956 views
Jul 17 2015 (11:06)
✿✿Lets Fight Corruption in Indian Railways✿✿
ashii~   1645 blog posts
Re# 1543089-1            Tags
No Tags
Past Edits
This feature shows the full history of past edits to this Blog Post.
@1543089-0  @Rang De Basanti^
Very good step! station was Halt (with no signal facility till few years back),can someone explain C station means now Track change facility available?
Page#    Showing 1 to 3 of 3 News Items
Scroll to Top
Scroll to Bottom
Go to Mobile site
Important Note: This website NEVER solicits for Money or Donations. Please beware of anyone requesting/demanding money on behalf of IRI. Thanks.
Disclaimer: This website has NO affiliation with the Government-run site of Indian Railways. This site does NOT claim 100% accuracy of fast-changing Rail Information. YOU are responsible for independently confirming the validity of information through other sources.
India Rail Info Privacy Policy