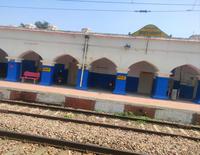 AGRA: At least 15 cows left to graze near high-speed railway corridor by local farmers were run-over by cruising New Delhi bound Sealdah Rajdhani express causing sudden disruption in railway operations and delaying over dozen express.
The incident took place in Agra district near Barhan railway station close to Goval village at around 8:28am.
According to railway sources, "Due to cattle run-over train operations were halted for nearly one hour on both Up and Down tracks. Two freight trains and 13 express trains were delayed, as the cow carcasses were thrown on tracks...
more...
after the collision with Rajdhani express.”
Nasim, a local villager of Goval said, "I was having breakfast at home when I heard heavy bang sound and rushed toward track to find scores of cow carcasses lying on track and stuck in train locomotive’s bull guard."
Speaking on anonymity, railway officials claimed that the case of cattle run-over has witnessed significant rise in number.
"In just 24 days (July 28-August 21), 193 cattle runover were reported and 427 trains were affected on high speed corridor which connected national capital to eastern part of India. Districts like Firozabad, Aligarh, Agra, Auraiya, Kanpur Dehat, Etawah, Bulandshahar, Gautam Budh Nagar and Hathras have reported maximum cattle runover," said source.
According to railways' latest data, between November 23 to December 19 of cattle run-over in Firozabad and Agra district, total 72 cases were reported in just 24 days, affecting 247 trains including 178 in Firozabad alone.
Speaking to TOI, district magistrate of Firozabad, Chandra Vijay Singh said, "After been intimated about the cattle menace by railway authorities, we have shifted nearly 3000 cattle in 41 cow-shelters of Firozabad. Letters have also been written to various police stations, tehsildars, SDMs and municipal commissioner to ensure that stray cattle are found roaming near railway track." "We also want cooperation from railway, to fence their tracks, so no one could trespass their property", he said.
"Two months back a proposal of fencing the tracks specially between Howrah-Delhi and Howrah-Mumbai was cleared and work has started. But we also want cooperation from various district administrations of UP, to ensure that no garbage is dumped near railway track, as it attracts cattle toward track," said chief public relation officer Ajeet Kumar Singh of north central railway.