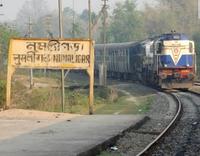 Nov 05 2018 (19:10)
Train Tag: Guwahati - Bengaluru Cantt. (Kaziranga) SF Express/12510 added by 12301HowrahRajdhaniTheGod~/1330462
Trains:  Guwahati - SMVT Bengaluru SF Express/12510
Stations:  Numaligarh/NMGY
Posted by: ApsaraRaniG~ 14 news posts
Wildlife Activists of North-Eastern India are against Railway Line Project through the famous Kaziranga National Park. According to the Activist, if the railway line is made through the national park area, it will harm the ecosystem of that place. Recently in October month demonstrations were held at Burapahar, Bagori, Kohora & Agoratoli gates of The Kaziranga National Park demanding withdrawal of Railway project through Kaziranga.
Sep 11 2017 (11:07) Board says no to Gohpur-Numaligarh railway bridge (www.assamtribune.com)
New Facilities/Technology
NFR/Northeast Frontier
News Entry# 315696      Past Edits
Sep 11 2017 (11:07)
Station Tag: Gogamukh/GOM added by I WANT UJJAIN TO BE MADE AS TERMINAL/1458461

Sep 11 2017 (11:07)
Station Tag: Tezpur/TZTB added by I WANT UJJAIN TO BE MADE AS TERMINAL/1458461
Stations:  Gogamukh/GOM   Jorhat Town/JTTN   Numaligarh/NMGY   Silghat Town/SHTT   Tezpur/TZTB   Gohpur/GPZ
Posted by: Harsh11953~ 289 news posts
GUWAHATI, Sept 10 - A railway bridge is not required at the proposed four-lane bridge to be constructed by the NHIDCL over the Brahmaputra between Gohpur and Numaligarh, the Railway Board has said, citing proposals of two other railway bridges on the river – one between Silghat and Tezpur and another on the Jorhat-Gogamukh new line.The Ministry of Road Transport & Highways had sent an inception report of the Gohpur-Numaligarh four-lane bridge project to the Railways to explore the possibility of constructing a rail-cum-road bridge in the site as “an integrated structure”.
In a letter to the NHIDCL, the Railway Board said the Tezpur-Silghat new line has been sanctioned in the Pink Book (which details all the budgetary allotment in railway projects)...
more...
of 2017-18, which includes a railway bridge on the Brahmaputra. “The NHIDCL’s Numaligarh-Gohpur bridge is 93 km upstream and therefore, it would not be desirable to modify the alignment of the Tezpur-Silghat line,” the board noted.
Moreover, the reconnaissance engineering-cum-survey (RET) has been sanctioned for the new Gogamukh-Jorhat line to connect Majuli and the Numaligarh-Gohpur bridge is 45 km downstream of the proposed railway bridge at the river island.
“Shifting of the alignment of the Rail Bridge to proposed location of Road Bridge across Brahmaputra will defeat the very purpose of the RET survey – connectivity of Majuli Island with Jorhat via a short route,” the letter stated.
Meanwhile, NHIDCL sources said once the State government gives the go-ahead after studying the inception report (the broad outline of the project), Louis Berger will start the work of preparing the DPR of the Numaligarh-Gohpur bridge. The four-lane bridge will be around 9-km long, with 10 km of approach roads on both sides.
Mar 16 2015 (14:36) MPs decry NF Railway functioning (www.assamtribune.com)
Politics
NFR/Northeast Frontier
News Entry# 216672      Past Edits
Mar 16 2015 (2:36PM)
Station Tag: Numaligarh/NMGY added by বিপ্লব কাগ্য়ুং बिप्ल्ब कागयुंग/1197909

Mar 16 2015 (2:36PM)
Station Tag: Guwahati/GHY added by বিপ্লব কাগ্য়ুং बिप्ल्ब कागयुंग/1197909
Stations:  Guwahati/GHY   Dibrugarh/DBRG   Numaligarh/NMGY
Posted by: Biplob Kagyung 88 news posts
NEW DELHI, March 15 – The functioning of the NF Railways came under close scrutiny in the Lok Sabha, as members belonging to the region decried the inordinate delays in completion of railway projects, including the national projects in the North-East, and demanded detachment of North Bengal and Bihar from the NF Railway.
Participating in the discussion on the Railway Budget, MPs hailing from the North-East criticised the Railways on several grounds ranging from stagnating project works to lack of passenger amenities.
Participating in the discussion, Ram Prasad Sarmah said that the need...
more...
of the hour is also to totally detach the NF Railway from Bihar and Bengal. The people of Assam certainly deserve a coach building factory in Guwahati. The Bogibeel Bridge was supposed to be completed in 2009.
There is no guarantee as to by when this rail-cum-road bridge will be completed. Assam and the North-East have been the most neglected areas during the last 70 years, Sarmah said.
Joining the discussion Sushmita Dev charged that the Railways should not use incomplete projects as an excuse for not starting new lines. The Barak Valley project was declared in 1997-98, but people are in the dark about what the Railways is going to do about connecting Agartala and Bangladesh and Chittagong and Myanmar.
This Government plans to make an ambitious railway line, which is called the Diamond Quadrilateral, but the North-East does not figure in it.
“There was a provision in our vision document 2020 for connecting all the capitals of North-Eastern States,” she said.
Participating in the discussion, Gaurav Gogoi said the Railways has a social mandate because many towns and villages are disconnected from the railway grid. For a State like Assam, it is important that the Railways connect upper Assam and central Assam through the Numaligarh-Jakhalabandha railway line, he demanded.
Ramen Deka, in his speech said that Assam remains isolated and the Government must be aware of the fact that Assam is in a strategic point geographically. If anything eventually happens with China, it is not possible to move the Army through a narrow National Highway.
“So, we need connectivity, we need broad gauge. I would request the Government to introduce a Jan Shatabdi from Dekargaon to Guwahati. I would like to demand again that D-category posts must be reserved for the local people,” he said.
Participating in the discussion, Badruddin Ajmal said even after 67 years of independence, the North Eastern States are yet to be connected with the railway network properly. “As I come from Assam, I can give many examples of such projects that crossed several deadlines for completion,” he said.
In his speech, Radheshyam Biswas said during the Railway Budget 2008, the Government had approved electrification of the Barouni-Guwahati rail route, but nothing concrete in that direction has happened so far.
Page#    Showing 1 to 3 of 3 News Items
Scroll to Top
Scroll to Bottom
Go to Mobile site
Important Note: This website NEVER solicits for Money or Donations. Please beware of anyone requesting/demanding money on behalf of IRI. Thanks.
Disclaimer: This website has NO affiliation with the Government-run site of Indian Railways. This site does NOT claim 100% accuracy of fast-changing Rail Information. YOU are responsible for independently confirming the validity of information through other sources.
India Rail Info Privacy Policy