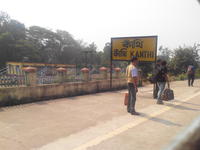 Nov 27 2015 (11:13PM)
Station Tag: Howrah Junction/HWH added by Vaibhav Agarwal*^/432532
Trains:  Howrah - Digha SUPER AC Express/12847   Digha - Howrah SUPER AC Express/12848
Stations:  Howrah Junction/HWH   Digha/DGHA   Mecheda/MCA   Tamluk/TMZ   Kanthi (Contai)/KATI
Posted by: Vaibhav Agarwal 1403 news posts
Kolkata, Nov.27, 2015 :
12847/12848 Howrah-Digha-Howrah Duronto Express will be renamed as Howrah-Digha-Howrah Super AC Express w.e.f 01.12.2015. This pair of train will have commercial stoppages at Mecheda, Tamluk and Kanthi enroute in both the directions as per following schedule:-
·Timings of the train at originating and destination stations will remain unaltered.
·There...
more...
will be no change in fare structure, i.e Shatabdi fare will be applicable.
·The tickets already issued for Digha Duronto will be also valid for this train.
·Booking for the train is already open.

Oct 21 2013 (8:06PM)
Train Tag: Digha-Howrah Duronto Express/12848 added by অনুপম**/401739
Trains:  Digha - Howrah SUPER AC Express/12848
Stations:  Medinipur (Midnapore)/MDN   Kanthi (Contai)/KATI
Posted by: Anupam Enosh Sarkar^~ 27775 news posts
The Digha-Howrah Duronto Express was stranded at Contai station in East Midnapore for six hours on Sunday because of a busted air-conditioning system. Passengers refused to let the train move till the AC was fixed.
The train finally started from Contai after 9pm and a senior official of South Eastern Railway said it would stop at Mecheda station to pick up food for the passengers.
He said the train was stopped after the passengers complained that the AC was not working when it pulled in at Contai around 4.10pm.
Sources...
more...
said the train was packed with tourists from Digha returning to Calcutta after the Puja holidays.
Salil Ghosh, 44, a resident of Lake Town who was on the train with his elderly parents, said the train had problems even before it pulled out of Digha around 3.35pm.
“The problem was there even before it started. Ten minutes into the journey the AC stopped working and the problem continued till Contai. Soon the compartments became suffocating because of the sealed windows.”
The railway official said both the generator cars attached to the train — which provide power to the ACs — were malfunctioning. Technicians were called in and they managed to repair one of the generators by 6.30pm. “It was possible to run the ACs partially. We wanted the train to start but the passengers insisted that the AC should work full strength,” he added.
Oct 20 2013 (21:56) Duronto passengers stop train after AC system stops working (zeenews.india.com)
Major Accidents/Disruptions
SER/South Eastern
News Entry# 153263      Past Edits
This is a new feature showing past edits to this News Post.
Trains:  Digha - Howrah SUPER AC Express/12848
Stations:  Kanthi (Contai)/KATI
Posted by: Rang De Basanti^ 138863 news posts