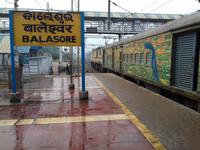 In view of persistent demand from MP,MLA & Public Forums it has been decided to provide halt of the following trains at other stations over SER

Broad gauge (any gauge wider than SG) was only adopted in a few cases, mostly before the gauges were standardized. The Indian variant of the broad gauge (5' 6") is only used in the subcontinent, Chile, Argentina and some commuter lines in the US.
General Travel
23602 views
_/\_ 1
Nov 18 (17:14)   BLS/Balasore (4 PFs)
kalingaUtkal
KHURDAROADELS~   402 blog posts
Entry# 5133767            Tags   Past Edits
This feature shows the full history of past edits to this Blog Post.
Being on HWH-MAS mainline, the stretch between KGP-CTC, there is no direct connectivity for Mumbai, Gujarat and Rajasthan for the peoples of Balasore, Bhadrak & JJKR. Either they have to depend on KGP or BBS to board the trains for their respective destinations. Till today, no political leaders (MPs) from concerned districts have raised the issues with Railway Ministry.

So, IR (specially SER) should divert any train or introduce a new train from BLS thru. BLS, BHC, JJKR, ANGL, SBP & ROU route for above destinations.
...
more...
Your views please ???

Kindly take a look at this new line formation from Bangriposi to Rairangpur , further thus to Tatanagar. If railways think of connecting this stretch, then many benefits can be earned like :
1. A complete Kharagpur (West bengal) bypass connectivity will be possible for Odisha to North india.
2. Baripada, one of the important city of Odisha will get better train connectivity and thus the backward regions of Mayurbhanj district of Odisha will get more development prospects.
Take...
more...
a look at the map and give your views.